Sign up for a premium subscription to receive forecasts like this several times per week via email, along with special storm reports, and real-time weather text alerts.

Happy Friday and Happy Hanukkah to those celebrating. This update will focus on our first chance for a snowstorm this season, next Wednesday. I am sure you are all eager for the details so let’s get started…

Sunny skies will continue through the morning today. Clouds arrive during the afternoon hours. Highs will be in the low 50s so try to get out and enjoy the fresh air a bit. Warm temperatures hang around through the weekend. Tomorrow will bring mostly cloudy skies and a few daytime showers, though. Showers will occur mainly during the early afternoon. More clouds than sun on Sunday as highs rise further to the mid-50s. Lows will be in the mid-30s. Mostly cloudy skies continue into the start of the workweek on Monday as highs drop to the low 40s. As this cold front passes, we may see some snow showers during the late morning and early afternoon hours. A coating of snow possible. Morning sunshine then on Tuesday before clouds arrive during the afternoon. Highs drop further to the mid-30s and lows to the low 20s.

Wednesday starts out cloudy as a nor’easter tracks towards our region. As of now, it seems likely that a moderate snow will begin during the early afternoon hours and continue through much of the evening, ending before midnight. The exact track of this storm is crucial to the snow totals. Model runs have been swinging between bringing the storm closer to shore and out to sea. For example, yesterday the GFS had the storm closer to shore for a total of 23 inches in our region; today it put it out to sea for a total of 4 inches. The Euro has remained a bit more constant with totals around 8-12 inches. The GFS also has a less pronounced upper-level trough than does the ECMWF. I think that that the Euro brings the storm a bit too far inland, while the GFS keeps it a bit too far off the coast. As of right now, I am expecting something in the middle of these two scenarios, say 6-10 inches. We will want to watch for gusty winds as well. Take those snow totals with a major grain of salt, though, as we are still many days away and we will continue to see changes in the track. Even a small change results in major shifts in snow totals. We will continue to keep you posted as we get closer. The one thing I will say now for us snow lovers…it seems like we have a good shot at getting measurable snow mid-next week.

After the storm, mostly sunny skies are expected on Thursday. Chilly and breezy conditions remain. Highs in the low 30s. Lows in the teens. Mainly cloudy skies over the weekend. Some rain or snow showers are possible Sunday morning. Highs rise to the low 40s by the end of the weekend, lows to the upper 20s. An active week of weather is ahead with several days bringing a chance for showers or moderate precipitation as multiple upper-level troughs swing through. However, highs will be in the mid-40s so most will fall as rain. Evening lows in the upper 20s could result in some mixing.

That is all for this update. We will continue to keep you posted as we get closer to Wednesday. As always, feel free to reach out with questions!

Have a nice weekend!

Here’s our initial Halloween forecast which looks unfortunately wet; although there is still room for change. To get even more details, sign up for a premium subscription at http://swctweather.com/subscribe with 15% off now through Halloween using code SPOOK15.

I hope you had a nice weekend and were able to enjoy the spectacular weather on Saturday! Unfortunately, our forecast for this week is looking a bit unpleasant as an area of low pressure meanders slowly off the New Jersey coastline. That being said, no significant weather-related disruptions are expected at any point during the next two weeks.

A cold front will cross the region this evening, bringing a round of steady rain. While 1-1.5” of rain is likely to fall as a result of this front, the ground is dry enough that we’re not expecting any flooding-related issues. The rain combined with thick cloud cover will keep temps on the warmer side with lows in the mid 50’s. This front will be slow to leave the region tomorrow morning, and I can’t rule out a few stray showers for the morning commute. The afternoon should be drier, but it doesn’t look like we’ll get much if any sunshine. Expect highs in the low 60’s.

Much of this week will be characterized by overcast skies, cool temps, and periodic rain as a coastal low meanders slowly to our southeast. Wednesday will feature the best chance of showers between tomorrow and next weekend along with the coolest temps in the mid 50’s. Thursday will be a little drier, but clouds will continue to stick around. High temps won’t be meaningfully different from Wednesday, likely just two or three degrees warmer. Friday appears to be the driest day of the week, but residual mid/upper level moisture will keep the overcast skies in place along with the generally cool temps. Another round of rain will arrive on Saturday as the coastal storm finally gets picked up by the next cold front approaching from the west. For the entire mid/late week period, a steady NNE breeze will add to the dreary feeling provided by the cool temps and cloudy skies.

That pesky storm will finally be out of our hair by Sunday though the exact timing of its departure could shift around by 12 hours or so. We’ll get some well-deserved sunshine Monday into Tuesday before our next storm system approaches Wednesday with another round of rain. Overall, temps look to be right around average, which is mid 60’s during the day and low 50’s at night.

The 11-15 day period looks warmer and drier as upper level ridging builds across the East Coast. You might find it interesting to note that this ridge will develop directly in response to the recurvature of Super Typhoon Hagibis which is currently moving through the Mariana Islands in the Western Pacific. We often see impacts to our local weather from Western Pacific typhoons this time of year, and it’s a neat reminder that everything in our atmosphere is connected one way or another.

Jacob will have your next update on Wednesday.

Now to today’s forecast which doesn’t have many notable weather events in it…for the remainder of today we will see mostly sunny skies. Highs will be in the mid-60s and lows in the mid-40s. Tomorrow should be another lovely fall day with very similar weather to today. Clouds then fill the sky on Sunday which remains try and brings slightly warmer highs in the low 70s.

We start the next workweek on Monday with cloudy skies along with late showers and rain starting in the evening hours and continuing overnight as a front passes through. Rain could be heavy at times. A few showers could continue into early Tuesday morning before clouds yield to sun by the afternoon. Highs on Monday will be in the mid-70s and lows in the mid-50s. Highs drop to the mid-60s on Tuesday. Sunny skies continue into Wednesday and into the first few days of the 7-10-day period. It should be another great set of autumn days. Eventually, clouds take over near the weekend with a stray shower possible both days.  Temperatures hover around seasonal averages of highs in the mid-60s and lows in the upper 40s or low 50s.

Dry weather resumes for the first few days of the 11-15-day period before some moisture likely gets dragged into the region during the latter part of the week bringing several rain chances. Temperatures persist from the 7-10-day range. No snow on the horizon.

That’s it for today’s update. Enjoy the weekend!

We are currently tracking a wintry storm that will move through the region tomorrow.  We’ve been updating Premium subscribers all day about the potential for school impacts tomorrow.  In a previous Storm Threat Alert we updated our expected timing of the system as it moves through the region.  It recent updates the storm has been delayed about one hour from what is seen below, but generally accumulation and timing expectations remain the same.  The storm should start as snow late tomorrow morning with snow finally moving into New Haven County between 10 AM and 12 PM.  Snow turns to sleet between 1 and 4 PM across the region, with freezing rain taking over between 4 and 6 PM.  Freezing rain turns to plain rain between 7 and 10 PM at the coast and between 10 PM and 1 AM inland, with some far inland regions still seeing patchy freezing rain even a bit later.  Eventually, the whole region is plain rain by early Wednesday morning as the showers move out.  Along with the list snow/sleet accumulations we are watching for up to a tenth of an inch of ice at the coast and between .1 and .25 inches of ice inland, with the largest ice accretions likely to be far inland (around and particularly north of Interstate 84).  Should the forecast change significantly we will send along another free Update. 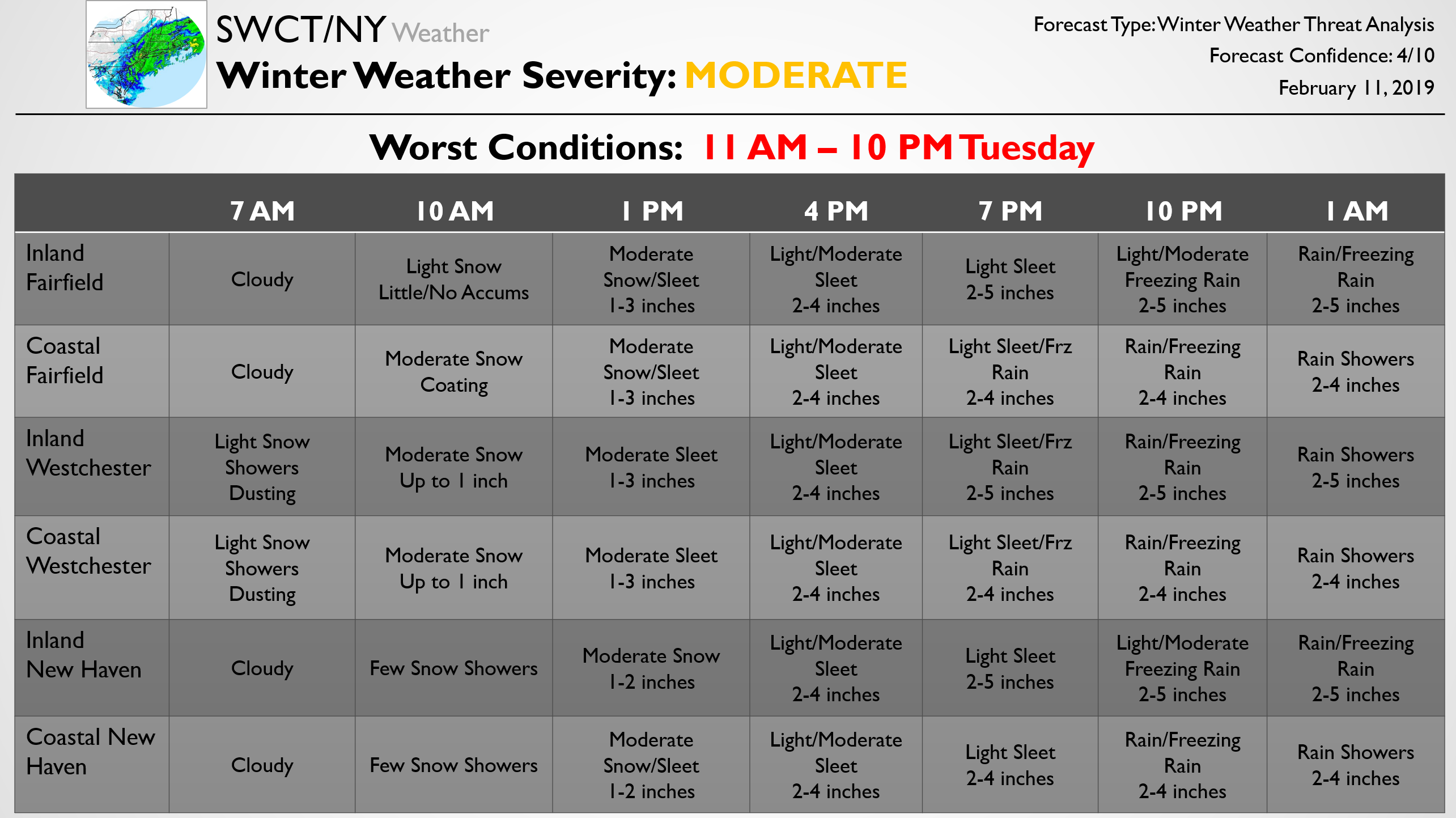 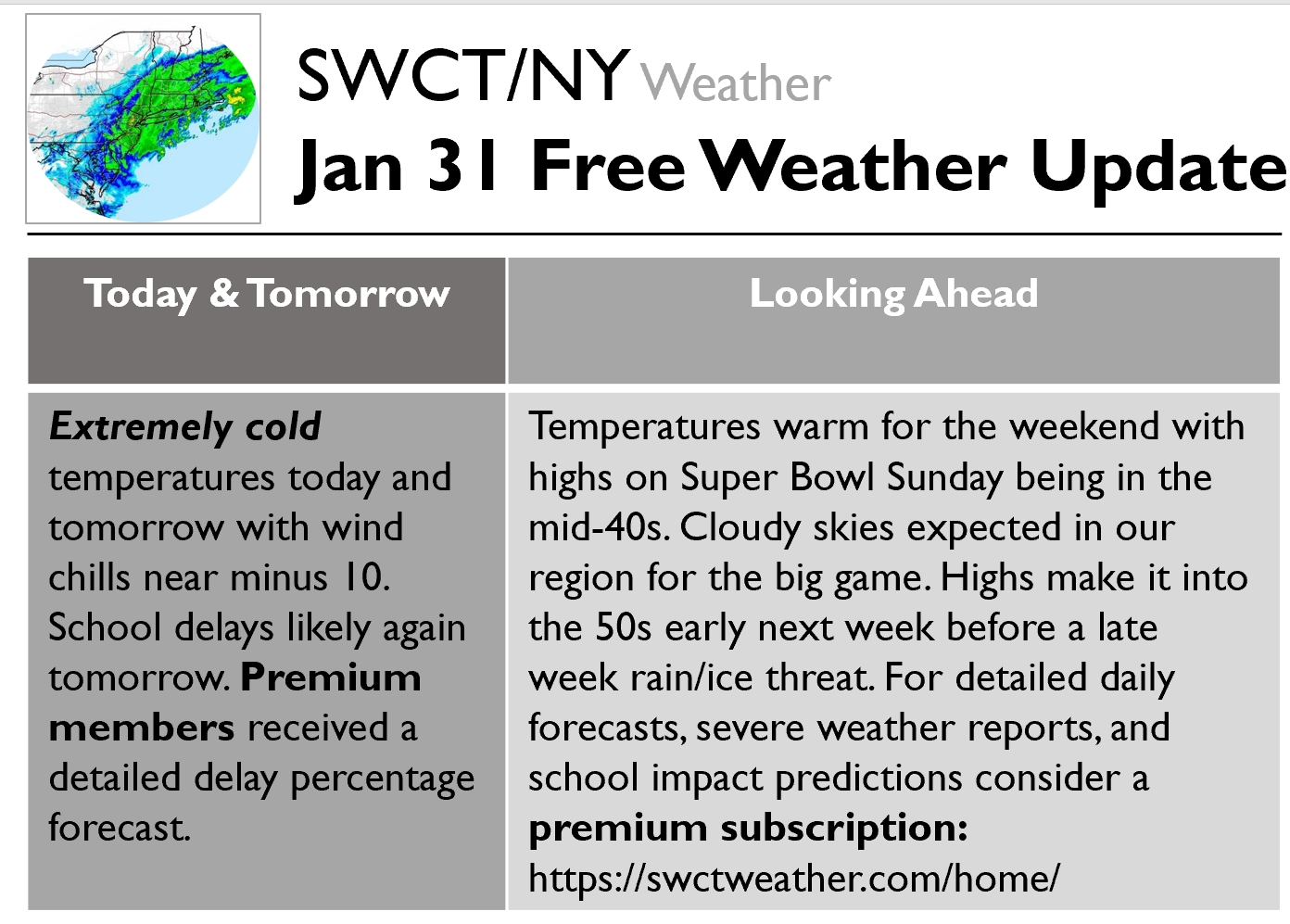 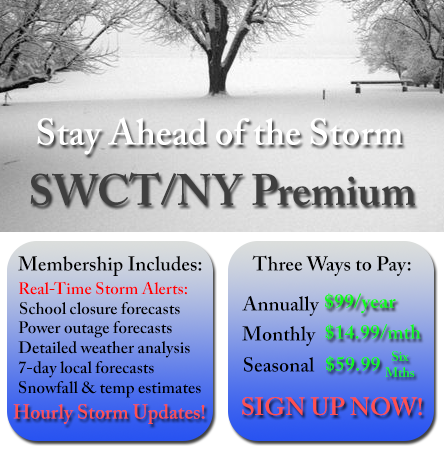